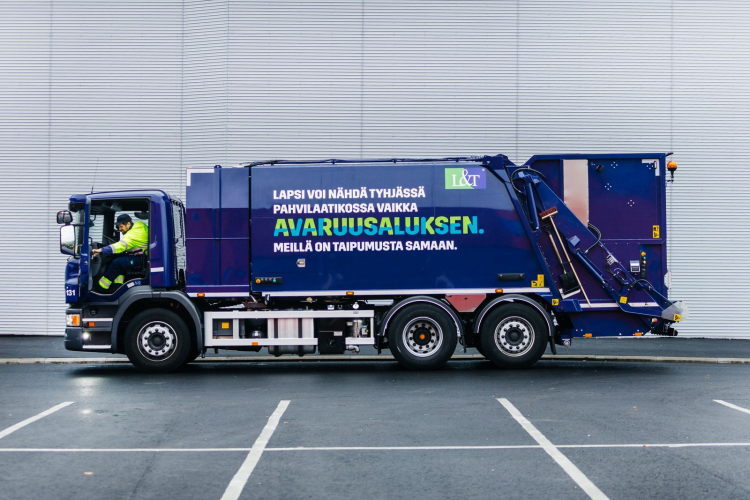 In this blog post, we’ll present a great real-life example of how Design Sprint was used in a customer project.

You can download our Design Sprint e-book as a pdf here.

Our goal was to validate the innovation using Design Sprint and as much experimentation as possible. Insight for innovation in the “construction marketplace” came from L&T's strategy days, where a number of initiatives were created through ideation.

The initial problem definition from L&T's brief described construction companies, their customers, as having the following problem: to limit excessive labor costs and avoid material delays, construction companies ordinarily order surplus amounts of resources when a construction project is ongoing. This results in; unused resources ending up as waste. And this creates unnecessary waste management costs to the construction company, lowers their environmental performance and is a detriment to the circular economy.

L&T wanted to explore how to solve this problem using a design sprint, with the following challenge statement: “How might we create an after-market for the unused construction material for consumers so that it could be used in its original purpose?"

Smaller construction companies and construction managers provided their estimations on the share of unused material to the total waste. To our surprise, the estimate was thought to be in the range of 10-20%.

The design sprint kicked off with the quick mapping of a team canvas that outlined the purpose of the sprint. Key insights were shared and, as all participants agreed on the potential benefits of the concept, it was mutually agreed that we could quickly advance to prototyping to make sure we could have at least one iteration of the concept during the sprint. We decided to use a business model canvas and value proposition as the tools to make sure we were creating hypotheses and ideas for the most business-critical aspects of this concept.

We decided to experiment with our approach within the business model canvas, finding the most important zero point for the cost of construction waste to L&T’s business customers. However, this approach led us to discover another zero point for the material and this raised an interesting proposal for further investigation: “What if the products on the after-market were free and we charged only for the logistics?”

We began ideation and came up with two alternative solutions for the after-market, based on key activities.

We identified the need to conduct a flash survey of our consumers: we wanted to both learn how they would react to unused but recycled construction materials, and to understand our consumers’ needs and material interests more. The survey was quickly drafted with Surveymonkey and posted as ‘market research’ to a chosen Facebook group, which we identified as having over 10.000 members of the target group we wanted to reach and could be considered as potential customers for the new concept.

The business would barely be profitable after transporting the unused material to a warehouse and if it would need to be transported again from there, the transportation costs would make it unprofitable. 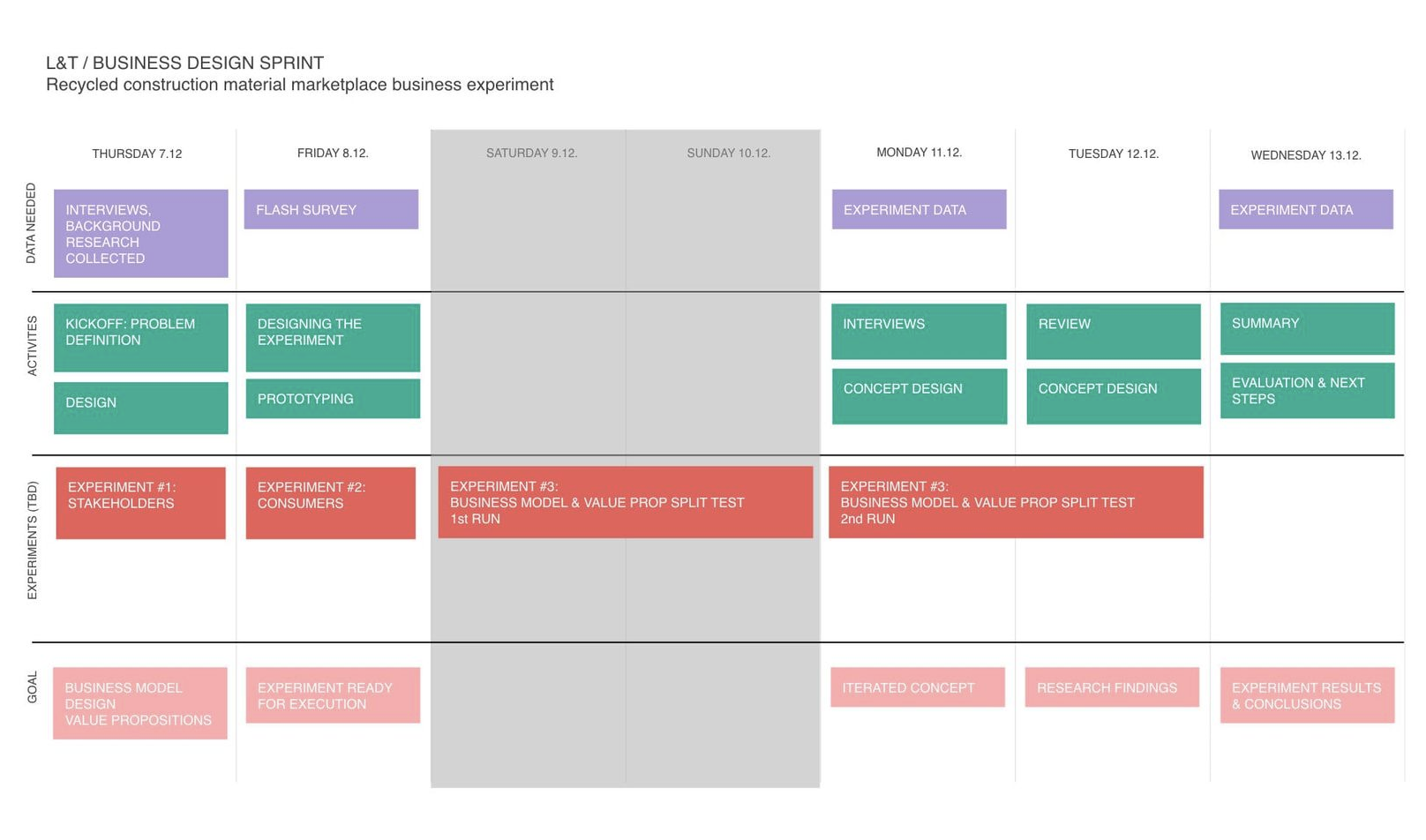 The interviews revealed no interest from the business customers to develop an aftermarket for unused materials as it was seen as having no relevance to their core business. One of the interviewed construction managers actually shared relevant insights from their construction company, where they had built a business scenario for an aftermarket. According to them, the business “would barely be profitable after transporting the unused material to a warehouse, and if it would need to be transported again from there, the transportation costs would make it unprofitable.”

The data from the flash-survey gave us more concrete data about the interest of consumers which we could use when creating the consumer value proposition.

We proceeded to create the second experiment to validate consumers' interest and research their behavior (jobs, pains, and gains).

Two MVP scenarios were the basis of designing the experiments. Two realistic-looking webshops were quickly drafted in sketch and coded into responsive landing pages to split test the two ‘competing’ models, or, as we named the test during the project, a speculative ‘Business Battle Royale’.

Both landing pages were embedded with Google Analytics and Hotjar screen recording analytics. Google Analytics would provide data about website visitors and the business experiment, and Hotjar could be used to research user behavior by screen recordings which captured the user’s actions; scrolling and pauses, where they clicked, and how they use the drop-downs and shopping basket. Hotjar also provides click maps and heatmaps to analyze the entire data as behavioral patterns. This combination of datasets would provide us with data to use as experimental evidence for decision making.

To validate the value propositions of business model A and B, a small budget was allocated for Facebook and AdWords campaigns. These campaigns would create the traffic for the split test and this enabled us to compare the engagement with each value proposition during the same experiment.

Much to our surprise, the disruptive concept was the clear winner. 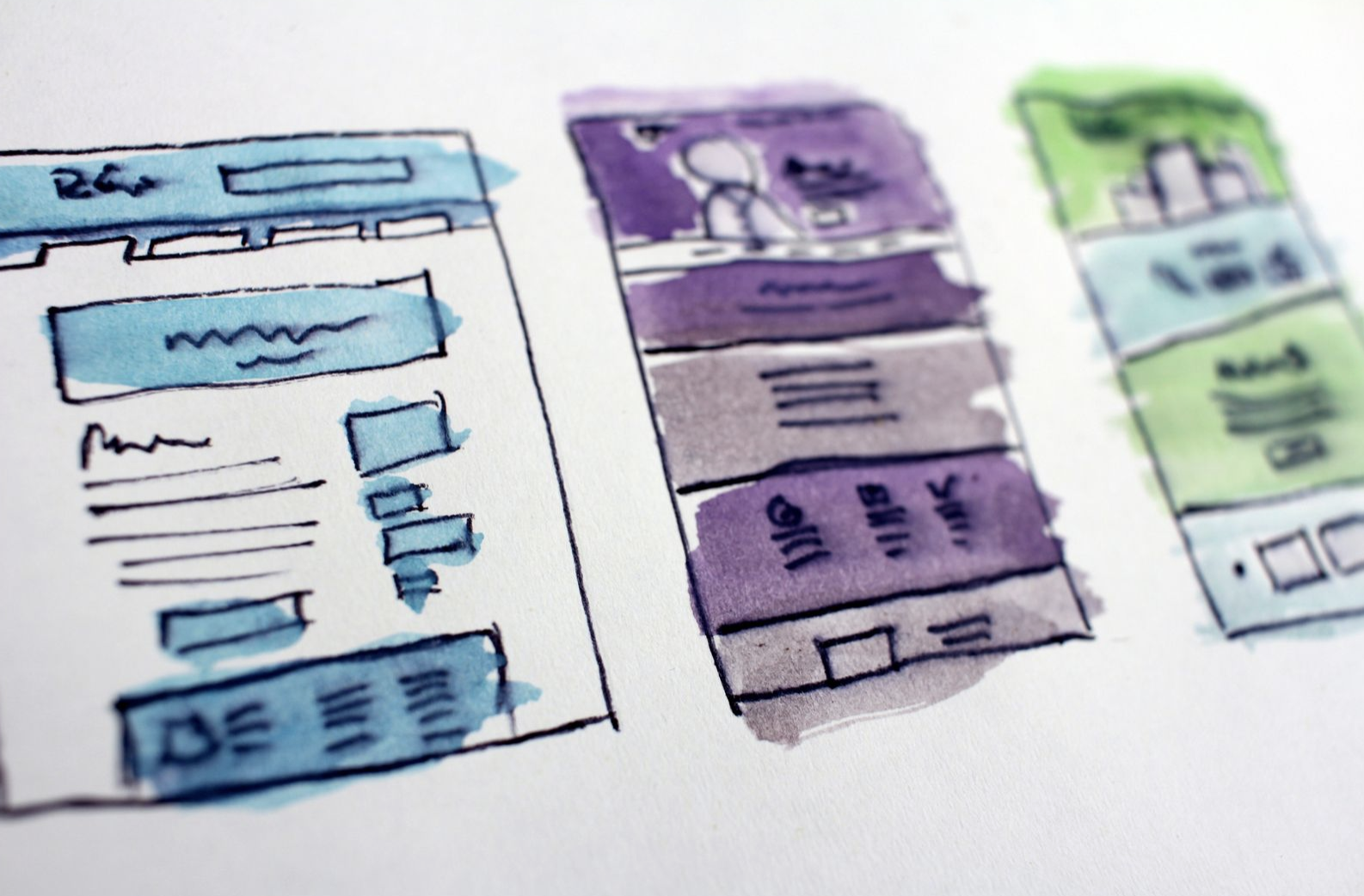 Day 5: Evidence from the experiments

As the team met up again on Monday, the results were in: much to our surprise, the disruptive concept was the clear winner. This led us to speculate whether the experiment taking place over the weekend perhaps excluded potential small business customers and, more generally, whether the results could really be that positive. It was decided to re-run the test again for another two days.

With the experiments continuing to provide data we also interviewed L&T’s key stakeholders to better understand what could be some simple and easy ways to get this concept to market.

We spent some time going through the screen recordings from the Hotjar data and it provided us with interesting insights. For example, users would stop to read the value proposition as well as put items into their carts, indicating that they perceived this to be an actual product.

The second research case discovered a potential business opportunity for an after-market of unused construction material, which, surprisingly, was not seen as interesting by the construction companies in the same context. The reasoning for this decision was made from the aftermarket’s relevance to their core business.

The last run of the business experiment provided more positive results for both models but there was still a clear preference for the disruptive concept. A summary of the sprint was created and key stakeholders interviewed to understand what worked well and how the process might be improved upon. Some traditional service design tasks were drawn up along with a run-through of the concepts with L&T’s legal department to move the project into an MVP phase and, potentially, even launch it as a pilot project. This innovation, despite still being in its infancy, has the potential to shift business models of the circular economy. The key to successful innovation is continuous experimentation since it can provide ways to get products to market quickly.

We made remarkable progress in one week.

Previous experiences of using ready-made design sprint methods to validate problems produced results that were not compatible with real-world execution. Our research discovered this same disconnect within design thinking projects. Instead, by taking the idea of time-boxed rapid validation from the design sprint and employing two essential business design tools, business model and value proposition canvases, we made remarkable progress in one week.

L&T was especially pleased with the design of the experiment and how it provided them with useful data to support decision making and reduce risks in the sometimes messy front-end of an innovation project.