How Critical Force supercharged their game with MaxIOPS.

About Critical Force
Critical Force is a team of passionate creators who strive to make the best competitive games for mobile platforms. While focusing on online multiplayer, we put our best effort into making games that are fun to play on both casual and competitive levels. With exceptional attention to detail, we have a strong ambition to become market leaders in the mobile game industry.

Critical Force is a Finnish game studio focusing on competitive multiplayer games for mobile. The company was founded in 2012 by our CEO Veli-Pekka Piirainen. Our current flagship game is a mobile FPS title Critical Ops available on Android and iOS. It has been downloaded over 34 million times and over one million people play this pioneering mobile esports game every day.

We received a $4.5 million seed investment from Korean game publisher conglomerate NHN Entertainment in 2016 and were also awarded the best Finnish game developer the same year. We have offices in Kajaani, Finland and in Seoul, South Korea.

Previous challenges
Our database and analytics servers used to suffer from the slow storage speeds on our previous provider. Although the servers offered adequate CPU and memory performance, the storage devices proved to be a clear bottleneck.

Fast player base growth further increased the load on the servers causing slowdowns and degraded performance. Large numbers of concurrent players also required additional storage and memory upgrades on the database servers. The storage performance problems led us to search for a better solution. We ended up choosing UpCloud due to their MaxIOPS storage performance which was our most important requirement for the new provider.

Hosting on UpCloud
We are utilising servers equipped with up to 20 CPU cores and over 100GB of memory. Such configurations are required to cope with the number of players and ensure service delivery. Our large player base requires an increasing amount of system memory and fast storage solutions. Our SQL servers demand such high write rates that using caches is not always possible.

Currently, our database servers are situated behind custom nginx based load balancers and an HTTP API server with HA implementations. Our development servers are also hosted on UpCloud, and we are planning to take better advantage of their APIs to speed up our server maintenance and deployment tasks.

Improvements
Hosting on UpCloud has enabled us to use and manage even larger datasets on individual servers. Due to the extremely high IOPS performance, we’ve managed to consolidate our services down from tens of hosts to but a few high-powered systems. The exceptional storage performance has allowed us to streamline our services and ensure availability. Storage loads are no longer visible to our players and the game doesn’t have to suffer from the lack of server performance.

UpCloud’s Singapore data centre has also provided us with the opportunity to expand our game servers in Asia. The improved storage performance has had so many advantages and we are glad to have moved away from overly complex server environments that were previously required due to the traditional slow storage solutions.

Future plans
We have plans to better take advantage of the UpCloud API to improve server management and deployment speeds as well as automate server cloning in the near future. Opening a new data centre in South America would mean a lot to us. Ready-made SQL clusters are also on our wishlist.
Jaa julkaisu:

How Evermade cloudified their company infrastructure.  About Evermade Evermade makes great websites from the first idea to Lue lisää..

How Wunder unified their infrastructure in all regions.  We are a company that designs, builds and optimizes digital Lue lisää..

How Zoner doubled their customers web site performance.  We at Zoner have been in business since 2005 and are one of the Lue lisää..

How Vaimo achieved faster time to market with performance to spare.  We help companies all over the world reach commerce Lue lisää.. 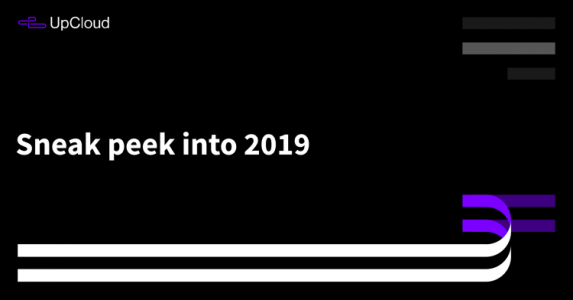 The holidays came and went, and while we hope you’ve had a great start for the year 2019, it’s only going to get better. A ..