Containers are going mainstream, but so far mostly in Public Cloud 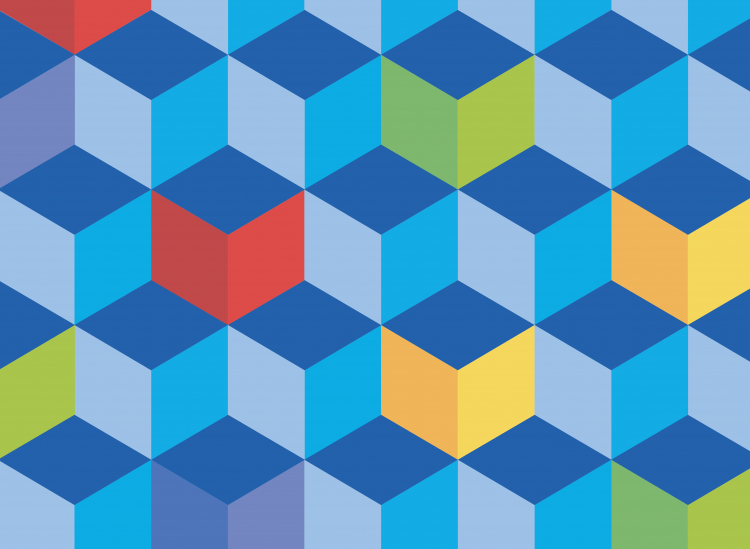 Judging by the topics of the virtual technology summits of 2020, it definitely appears as if everyone is in the business of continuous delivery and integration. To better understand what organizations really are doing in this area, Datalounges set out to study where Finnish organizations actually are when it comes to DevOps practices. Datalounges Container Barometer 2020 -study was conducted in the first calendar quarter and collected information about containerization and technologies that make use of containers to serve businesses looking to take advantage of agile practices and new technologies that support adopting such practices.

You can reach out to the author for a full briefing of the findings, an hour of your time we at Datalounges think you will find insightful, but here are some findings of the study. Datalounges is looking to run this study yearly to collect trend data to better understand the developing market for container management and technologies necessary to do that in a compliant manner.

The study also included background questions about IT consumption and technology adoption. Information about scale was also requested for context and analysis.

Picture 1: Scale of IT environments under control

First thing to notice about the use of IT in these organizations is that the environments have grown to become very diverse. Not surprisingly, larger organizations were likely to have more variety, but even companies and organizations with no more than 50 to 200 servers across their Hybrid Multi-Cloud often have containers in production and were users of one or more of the Public Clouds. 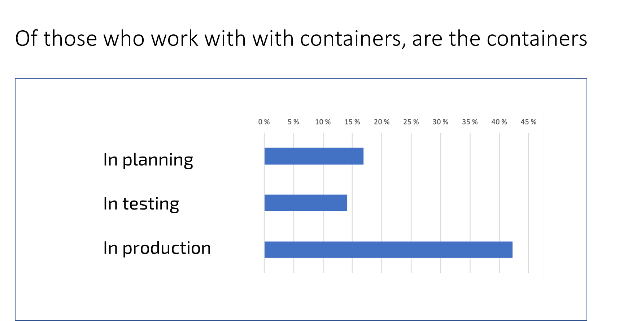 It was expected that containers and container based solutions would be commonly used in a small and quickly evolving market such as Finland, but it was still somewhat surprising that already 84% of the surveyed organizations were either planning, testing or running containers in production. In addition to that, the majority of the organizations running or planning to run containers were already in production.

Survey showed that most of these deployments, however, are small and in early stages. The study found some very advanced deployments with more than 2000 containers in test or production, but the majority of the deployments are relatively small with less than 50 containers. Also not surprisingly, as the data included regional service providers – they had had relatively large container environments in production. It should be noted that because of that some of the data may be duplicated and show usage both at the end customer and at the service provider answering the survey. In the broader scope of the study this however has a limited effect on the results.

So what is then happening with container adoption, clearly a lot of this development is new even if some of the companies working with containerization have already deployed vast infrastructures.

In the study Datalounges wanted to better understand what kind of an effect the emerging, new form factor has on the infrastructure decisions and whether the changing IT landscape has affected how organizations view the relevancy of different deployment options for their applications. 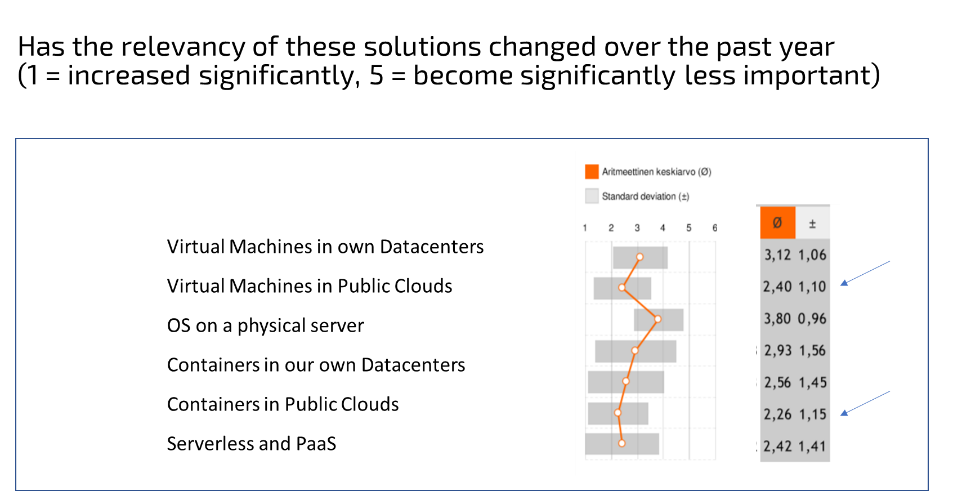 It is safe to say that past year has been significant when it comes to Public Cloud adoption for many of the organizations included in the study. Both virtual machines and containers in Public Cloud have become significantly more important while the importance of own data centers have stayed mostly the same.

When it comes to different platforms and services where to run containers, there is a lot of variation according to the study. It was possible to give a score between a 1 to 5 value for each of the possible production environments. Public Cloud comes up as the most important, but also solution providers are considered important. It should be noted here that as the market in Finland leans heavily on regional solution providers and most large organizations have an infrastructure partner to run the daily operations – many do not have data centers where to run container production. This partly explains the low number of on-premise container production.

So, what are the potential users of containers looking to gain by deploying containers?

Picture 5: Sought after benefits of containerization

Costs savings and easier manageability are definitely there, but the clear number one benefit sought after by containerization is the increased agility. Especially advanced users of containerization are looking to respond to change quicker and achieve that faster time to market. Then containers and containerization even if easy, is not simple. On the contrary container orchestration is considered a very complex technology.

The responses show a correlation between customers who are advanced users of containerization technologies, are users of Public Cloud and are looking to increase agility of IT with containerization. These are also the same survey participants who are actively looking to expand use of Serverless and in some cases Private PaaS to further take advantage of technologies that make rapid deployment of applications possible. 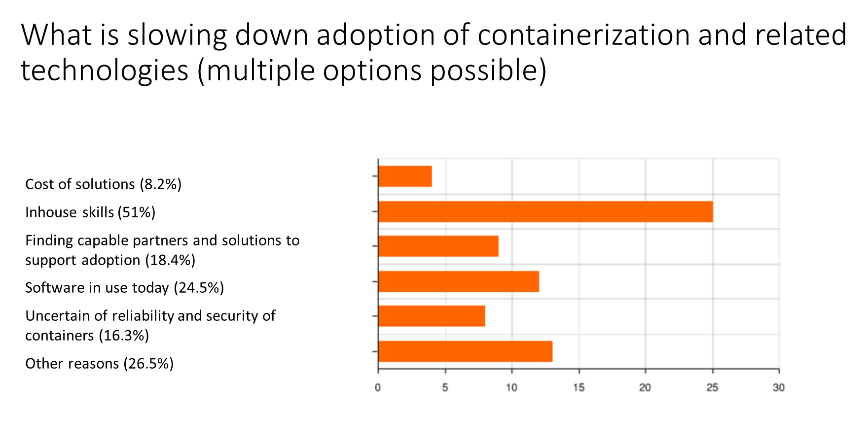 Picture 6: Obstacles for container use

The responses show that skills and capable partners were identified as key obstacles for containerization and adoption of containerized applications. Cost plays a very limited role, but this can be related to the fact that many containerized environments are very small and hence do not carry a lot of cost in comparison to other business application environments.

There is another interesting correlation, when we look at who actually then builds these containers.

The survey shows that containers most often are a headache for developers or IT partners. With the additional data in the survey not covered in this post, we can make some conclusions about how containers are adopted.

When looking at the data, the largest environments which are also likely to have most maturity or at least have had containers in production for the longest time also are the ones who are looking to increase agility. These companies and organizations are also the ones who have purposefully containerized business applications and where the developers have led containerization by selecting containers as a form factor for a new application. These same companies now show significant interest in Serverless and Private PaaS as the next step for developer productivity. It is safe assume say that as these organizations have highlighted the importance of Public Cloud and have marked it as the key platform to run containers – what has happened is that when the developers have created their applications as containers, the only place to run them without the problems of highly complex technologies related to container deployment, has been the Public Cloud.

So it appears that users who have deployed containerized applications broadly, have a bottleneck when it comes to related skills and are looking to tackle those challenges by using Public Clouds to have easy access to infrastructure and move up to Serverless to increase developer productivity.

The study also asked about the controls and how such container environments are managed. Typically it appears these containerized applications are outside of management routines and IT operations processes that have been applied to manage and maintain virtual machines across the IT landscape.

As mentioned in the beginning of this article, there are a lot interesting findings to discuss in this study and Datalounges is happy to provide a briefing of the results, but clearly there are some considerations that this study highlights

In conclusion the study shows the expected results of digitalization. With business becoming increasingly digitized, the developers creating these business applications under pressure to perform are selecting and inventing the tools to get the job done. The study also shows that new applications are not the only containerized solutions entering the virtual Multi-Cloud Datacenter. Also business application vendors are increasingly choosing the container form factor to deliver applications.

Having to manage containers created by untrusted third parties and inhouse developers sets entirely new requirements for companies to prepare for container adoption.

Many organizations are very early and maturity is low when it comes to container production, but containers are not going away. Instead there will be more container adoption routes to manage and more services to monitor.

It will again be interesting in the infrastructure business for some time!

The world of IT -infrastructure is moving towards containers, which enables great ideas to become great digitalized services quickly, reliably and systematically. While containerized software is becoming the form factor of choice for the IT industry, new technologies challenge how IT is consumed by enabling promising multi- and hybrid cloud solutions for cost benefits and agility. Datalounges, the container operations company, is an infrastructure expert with best practices to manage your journey to consume containers in a holistic way taking into account delivery, continuity, reliable operations and visibility in private, public and hybrid clouds. Use containers with confidence, choose Datalounges.

Kim Aaltonen is the Managing Director of Datalounges Oy and holds a board position for Finceptum Oy. An open source technology enthusiast he is always on the lookout for something new in the IT infrastructure business. Please reach out to https://www.linkedin.com/in/kim-aaltonen-67637/

The Finnish Nature Photo of the Year competition (Vuoden Luontokuva) is the largest competition of its kind in the Nordics. Read Lue lisää..