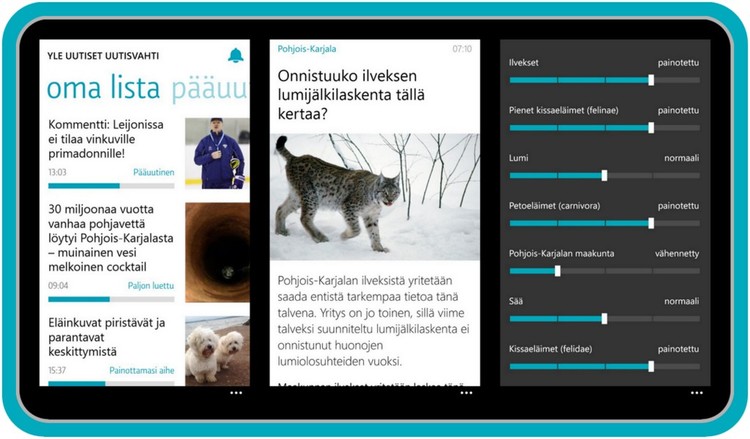 The Finnish Broadcasting Company Yle highlights personalization as the key for increasing value of news services.

At the start of 2014 Yle launched a pioneering news watchdog app Uutisvahti for mobile users with great success. The idea of the app is to deliver personally interesting news in a simple-to-use format.

Leiki SmartPersonal works seamlessly as a part of Yle’s proprietary recommendations system that also includes, among other factors, editor’s highlights and social weighting. The role of SmartPersonal is to learn user interests from article clicks to provide personal recommendations. The news application also offers users the possibility to customize their interests by topic, which is done using detailed content analysis from Leiki SmartProfiles in addition to manual classification by editors.
“The time of one-size-fits-all news is over. We are introducing a more personalised service to complement the traditional news offering. This a big deal for Yle – and it’s only the beginning,” stated the Head of Internet, News and Current Affairs at Yle, Mika Rahkonen at the release of the service.
In a recent article Yle’s Editor-in-Chief, Atte Jääskeläinen talks more about personalisation and the watchdog app. “Yle News Watchdog App presents our effort to increase the value of news services to the user.”

“[The app] has received an exceptionally enthusiastic welcome. There are not many news apps in the world that have received such good ratings from their users,” boasts the Editor-in-Chief Jääskeläinen.
Leiki is thrilled about the launch and positive user feedback for the News Watchdog and considers this as a stellar example of a successful Leiki Smart Services deployment.
Download Uutisvahti: Android phones | Windows phones | iPhones.