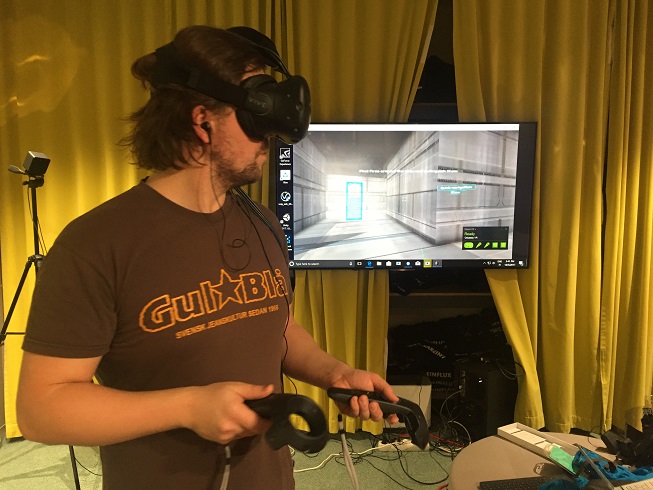 I'm extremely happy to announce that our game Odyssey VR: The Deep Space Exploration is now launched on Steam. If you want, I would be happy to hear how you like the experience and please, feel free to provide some feedback. It will very likely to be more or less developed in the future. You can play it on powerful Desktop PC or in Virtual Reality (HTC Vive). The game is available on Steam:

Odyssey VR is a story driven space adventure single/multiplayer game that you can play on Desktop and Virtual Reality. The actual gameplay is approximately 20 minutes in duration and allows the player (the explorer) to experience different tasks in a spaceship.

Making this game has been challenging at times and making it has been one of my main priorities this Autumn. Definitely, a learning experience. May the eternal flame guide you whether you enjoy playing it or not so much!

Odyssey VR is a continuation project from a Unity project called Astronaut experience. Early version of Astronaut Experience was presented at Stockholm VRscifest in May 2017. The development of Odyssey VR started right after that project and we published it in November 2017.
2. The team

There are two main developers and programmers involved to the development. Besides that there are also freelance audio professionals and a voice actor involved. Finnish Virtual Reality Association FIVR provides feedback, consulting and office spaces for our project. Plenty of testers were involved in the devilment process and offered their feedback.

3. Our motivation
Astronaut Experience and the deep passion for space and exploration.

4. Future updates
We would like to get more feedback and implement based on that.

5. Future plans
Yes, we do. We have many side projects underway and will possible launch them later.

6. A little bit about us
We are a small indie game studio working at FIVR Finnish Virtual Reality Association spaces in Helsinki. Odyssey VR adventure game was developed and will develop along the way, since it is a early access. It was developed mainly by two developers from Finland with the help of a sound designer, a narrator and a 3D modeler. A lot of sweat, blood and tears have been put to this game, so we would like to receive feedback and how we could improve this game in the future.