The average annual salary of a software developer is more than 60,000 euros per year 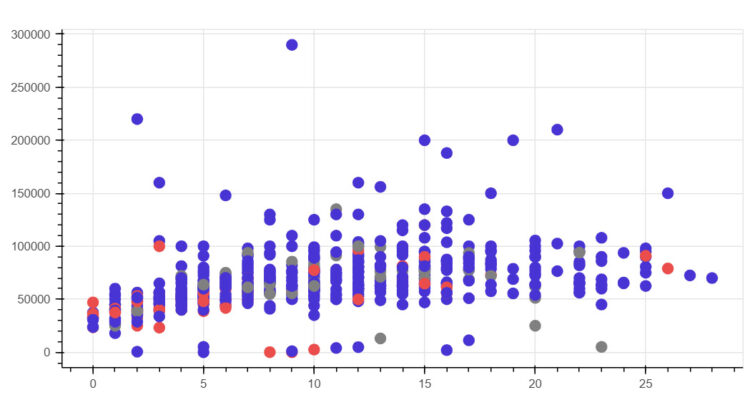 As an interesting observation, the software developers of the Helsinki city area did have very similar salaries when compared to those at Kalifornia region, even though life expenses are much lower in Finland.

Multiplied by twelve, the annual salary of a software developer and designer or an IT consultant is on average 63,912 euros per year, with the median salary being 61,200 euros per year.

However, according to the salary survey, the average annual income of developers is 68,105 euros and the median annual income is 65,000 euros. The increase in relation to the monthly salary can be explained by various bonuses. These bonuses include dividends from shares, for example, as several companies in the software industry engage employees with shareholder programs.

In addition, based on the answers in the survey, it is advised to multiply the monthly salary by 12.5 times to obtain the annual salary.

The average monthly salary of a software expert is increased by a few very highly paid developers, which are always found among software experts. This is the reason why the average salary is higher when compared with the median salary.

Of the respondents, 616 were wage earners and 68 were entrepreneurs doing billable work.

Transcript from the research data

Attached is an excerpt from the answers to Koodiklinika’s salary survey. The research results are naturally anonymous and the respondents could leave the answer fields empty if they wanted. Not all rows or columns are visible in the extract.

The graph below shows the annual income of a software developer on the vertical axis and the years of experience on the cross axis. 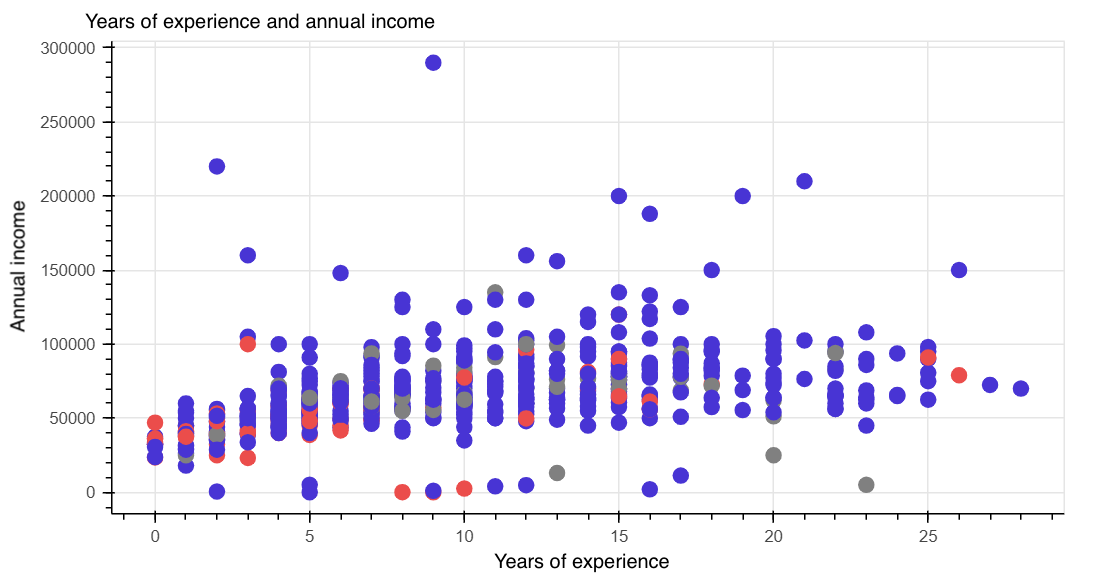 The separate blue balls in the upper part of the graph are individual high-paid male respondents. The blue dots demonstrate male respondents, and the gray balls depict people of the opposite sex, or experts in the IT field who did not state their gender.

The red dots, on the other hand, represent female respondents, almost none of whom have reached an annual salary of more than 100,000 euros. Thus, we can see that the ones with the highest salaries in the software industry all seem to be men.

Companies in the software industry have been recruiting especially senior developers for a long time. Based on the graph, it seems that the salaries of software experts will increase after about five years of work. After about seven years of work experience, salary growth still continues, albeit moderately.

Even software developers at the very beginning of their careers seem to be able to make quite comfortable salaries. In terms of salaries and job security, there is definitely a pull for the software industry.

Overall, gender does not seem to have a big impact on pay, as female software developers seem to be evenly distributed in the graph. There has been a lot of conversation on pay equality and the attraction of female experts to the IT industry, which has undoubtedly affected the distribution.

However, female respondents are slightly behind men in terms of salary.

Salaries in the IT and software industry by region

The graph below shows salaries in the software industry by region. Unfortunately, the layout of the graphics was not the easiest and, for example, the city of Turku was excluded from this level of detail.

The gray bar in the graphic shows the distribution of wages in each city or region. The bar for the SME region shows that the most highly paid experts in the software industry are located in Helsinki and its surrounding areas. The median and average salaries of software developers are also higher in Helsinki (capital region) than in the rest of Finland, which is certainly explained by the higher living costs, as well as the competition for talent in an area full of technology startups and software companies.

The dark blue dot describes the city’s median salary in those areas where there are more answers. The dark red dot, on the other hand, depicts the average salary.

The traditional favorite cities of the IT industry, Helsinki, Tampere and Oulu, stand out in terms of the number of answers, as well as California, which somewhat surprisingly is at the same level of average salary as Helsinki.

Salaries in the software industry by age

The salary survey section describes the salaries of software developers and other experts in the software industry by age. Age was stated in five-year cohorts, starting from ages 21-25.

Age, which often correlates with years of experience, slowly increases the average salaries of software developers up to the age of 41-45.

Somewhat surprisingly, among the 21–25-year-olds there are higher-paid software experts than among the 26–30-year-old software developers. This same phenomenon has also been seen in salary surveys previously carried out by Ite wiki, where completely uneducated experts have been found at the top end of the salary range. In other words, software development skills learned at a very young age can lead to good salaries at an early stage. The best talents are also quickly recruited from the market, or they directly become entrepreneurs.

The results of the salary survey in the software industry are likely to be very reliable, as there are no fewer than 684 respondents. I know this is a very good result, because when we have carried out IT industry salary surveys in Ite wiki, getting responses of over six hundred has required really extensive communication and the activation of respondents, even though Ite wiki reaches more than 300,000 users a year.

Koodiklinikka, of which I myself have been a member for a long time, is a Slack group of about 4,500 experts in the software industry, whose members are interested in following the salary development in their own field.

When reflected onto this background, we can conclude that the questionnaire directly reaches the target group and is likely to be well protected from unreliable answers.

The large number of respondents make surveys more reliable on a general level. Even if someone plays tricks on their answers, the survey provides reliable information about the salary situation on average. Koodiklinikka’s salary survey is also carried out very transparently and all source data is available for the community to review.

However, the Koodiklinikka members themselves estimate that the community represents the upper end of the salary distribution in the software industry. For example, one user commented in the salary research thread that ”in general, KK is a big bubble (of well paid developers), but in my opinion the active people that are interested in the field deserve to be paid well”.

The survey included both wage earners as well as self-employed software developers and consultants. 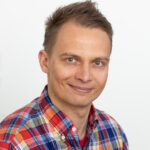 More on the subject (Finnish): 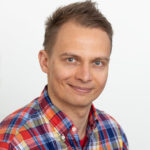